Whereas the buzzer is designed to be fished slowly and depends on its shape to fool the fish, the leech approache 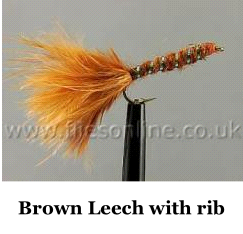 s the problem from a different direction. Here we want to use movement to attract the fish, both movement through the water and movement of the fly itself.

This fly is basically one piece of material that is tied along the shank of the hook so that the material hangs off the end of the hook at the bend. The material used must be supple and flexible. This tail will then undulate as it is pulled through the water. Here's how it's done.

Use a hook with a straight medium length shank. A Kamasan B410 is ideal. Place it in the vise with the eye nearest to your working hand. Select a base thread the same shade as the material you are using. As in the Bloodworm Buzzer, start off with a few turns towards the eye of the hook and then back down to where you started. Snip off the loose end. Wind the thread back up to the eye, then all the way down to the bend. I sometimes run the thread back up to the eye and down to the bend a second time to give a really substantial foundation. Either way, the thread should end up at the bend of the hook. Let it hang down while we get the rest of the goodies ready.

This is when to decide what the main body of the leech will be made of. Over the years I have experimented with a host of materials for this fly. Arctic fox, silicone sheet cut into strips, fine wool and braid have all crossed my vise at one time or other. But the finest is still marabou feathers. These are sold in packs of half a dozen or so, each pack individually coloured. That means no more trying to dye arctic fox fur in the kitchen sink! 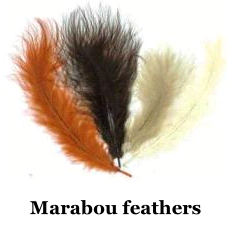 Chocolate brown and coral (pink) are my two colours of choice and I would regularly put out a two fly team with one of each in use. Fished by a figure of eight retrieve at around ten feet down they are deadly! Put the coral on the dropper and the chocolate on the point for best effect. Fished about three or four feet apart, it looks as though the chocolate is chasing the coral, a chase that the trout happily joins in! If it's good enough for the chocolate to be chasing then the trout wants some too - and it'll have the brown as good measure. I have often caught fish with both flies in their mouths - and be warned, this combination often hooks two fish at once!

More about marabou. This feather originally comes from the adjutant bird, a stork found in Africa and the Far East. They were reared for their feathers, which were also used in ladies fineries. It is now obtained from the domestic white turkey. The feather is extremely fine and supple and is easily dyed. Take the feather and hold the frond nearest the base of the quill between the length of your index and middle fingers. The idea is to trap a length of feather as you cut it off the quill. You will need about an inch worth (2.5cm.). Simply snip gently up the feather next to the quill to release the plume into your fingers. While still holding it trapped, put a generous amount of saliva onto your other finger and thumb and wet the plume to stop it flying away. Once it is wet it will stay together and is easy to manipulate. 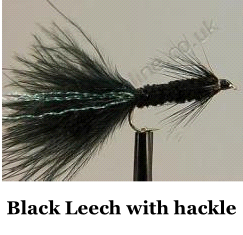 What we want to do is tie the plume of marabou to the shank of the hook. Lay the plume along the top of the hook and position it so that the end that was nearest the quill is sitting just short of the hook eye. Holding this in place, trap it in place by bringing the base thread bobbin over and winding it on three or four times. This should have the effect of leaving a goodly part of the marabou hanging past the end of the hook - like a tail. Keeping the plume in position, wind the base thread up the hook shank in four equally spaced turns, finishing just below the hook eye. Wind on the thread just below the eye to build up a small head - about ten or fifteen turns - and finish off with a whip finish, as described in the Bloodworm Buzzer.

If you want to create a fuller body then you can take a second plume of marabou and secure it at the bend of the hook with a few turns of thread. Wind this plume, which again is easier to manipulate if you have wetted it first, in equally spaced  turns up the shank of the hook. Holding it in place, wind the foundation thread, again in equally spaced turns up the shank and finish off with a small head of thread as described above.

Very carefully and very sparingly spread some superglue along the shank of the hook but NOT along the marabou tail that extends beyond the hook. The tail must be left free of glue or it will not move seductively in the water. Occasionally, I ignore my own advice and put a tiny, tiny drop of superglue a fraction of an inch beyond the hook bend. There is a reason for this. When casting this fly it will sometimes get its tail wrapped round the bend of the hook. You won't find this out until after you have wasted your time retrieving it in the most alluring way possible! That tiny drop of glue makes that first fraction of the tail stiff and avoids this danger. But too much glue will seep along the tail and stiffen the whole thing, which will then move through the water like a coloured stick!

If you tie your own flies another solution to this problem can be found when tying in the tail. Make a single turn of thread behind the tail  - between the tail and the bend of the hook - to give it just a touch of separation from the shank of the hook. Dave Cammiss shows this technique in a number of his videos and it certainly works for me. It is a more elegant solution than a touch of glue but only have the choice of which method to use if you take the plunge and start tying your own flies.

Again, you can introduce a rib into this fly if you feel so inclined. You can also put a brass bead onto the hook before you start building the fly, just like we tried in the Bloodworm Buzzer. I sometimes use a beaded leech as the point fly to make it swim a little deeper. These are subtleties that you will try as you become more adept.

This video shows an American gentleman tying up his version of the leech. While I would not use peacock herl for the body - I think it’s too fragile for this use - you will get a good idea of how easy it is to make this fly.