Apart from fishing with a bare hook, I'm not sure you can find an easier fly to make - and it really works! The hardest part is finding the right hook to use, because the secret to this fly is in its shape. What we are seeking to imitate is the larval form of many water creatures, including gnats, midges and mosquitoes. The ubiquitous name for these larvae is bloodworm because of their shape and colour, a dark red. 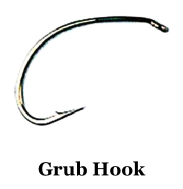 The hook required is a grub hook with an over-exaggerated bend to its shank. Whereas a normal hook would have a straight shank from its eye to the bend that creates the hook, this one has a curved shank that turns the overall shape of the hook into more of a "C". Drennan and Kamasan make these and are available through their on-line stores. A size 8 or 10 should fit the bill. You will also need to obtain a dark red thread, which again is available online. You should assemble your fly tying kit and ensure that you can leave it in place to allow the flies to dry once built. 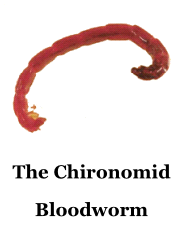 Virtually every fly starts with a line of thread wound onto the hook to form a secure base for whatever else is to be used. With the bloodworm buzzer there is nothing else! That's what makes it so easy. Secure the hook in your vise at the sharp bend so that the eye is free and horizontal and facing the hand you work with. Load your bobbin with the thread by sliding the bobbin threader up the tube of the holder and putting the end of the thread into the gap in the wire opening. Then just pull the threader back through the tube and the thread will follow. You might want to put a small elastic band around the reel of thread – when (not if) you drop it the elastic band will stop the thread unravelling as the reel rolls across the floor! Now hold the bobbin so that it rests in your palm. The nozzle with the thread coming from it should be between your finger and thumb. Hold the loose end of the thread in your other hand.

Still holding the loose end in your free hand, place the thread so that it is against the shank of the hook with bobbin above the hook and the 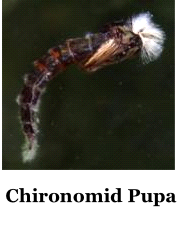 free end below it. Starting just behind the eye of the hook wind three or four turns of thread onto the shank towards the eye and then another three or four turns back down the hook to where you started. This should have trapped the loose end under the turns so that you could now let go of the bobbin and it would hang down and stay in place. Trim off the excess thread from the loose end.

Now simply wind the thread back up to the eye and then all the way back down to the sharp bend of the hook. This may entail re-positioning the hook in the vise to give access to the final part of the hook shank before it makes that sharp turn. Make sure that each tur 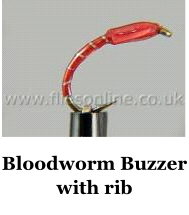 n of thread nestles up against the previous turn to make everything neat and tidy. The thread is then wound all the way back up to the eye once more in exactly the same way. You now need to form the head and wing case of the buzzer and this is easily achieved by winding the thread back down towards the bend for about ten turns, then back up to the eye and repeat this process one more time. The idea is to build a thicker layer of thread just like in the picture opposite.

Finally the thread needs to be tied off. You can either use a whip finish tool, following its directions, or use the following method. Make sure the thread is wound on the hook close to the eye. Hold the bobbin in your lazy hand - the one furthest away from the hook eye. The bobbin should be held where it hangs down from the fly - you are just holding it in place. Make a V sign with your other hand - index and middle fingers extended. Now place your two fingers against the thread between the bobbin and the hook with your hand facing away from you. That means that your two finger nails should be facing you.

Now bring your fingers back to the front of the hook, twist them again and slip your fingers off the thread as you gently pull the thread tight on the hook. This action has put a double hitch in your thread and secured it onto the hook. You may wish to do this complete manoeuvre again to give extra security to the finish. Snip off the thread.

And that's it! You've just tied up a bloodworm buzzer. Place it where it can be left unattended - the octopus is ideal for this. Carefully and sparingly coat it in superglue, excluding the eye hole. Use a dubbing needle to spread the glue. Leave it to dry thoroughly.

That has got to be one of the quickest and easiest flies to tie and it is a real killer at all times of the year. Read the section on summer fishing to see how this fly is used. Remember, it's the larval form of a fly so it has to be used slowly for best effect. This video shows Dave Cammiss tying this fly.

There are numerous variations on this basic theme. Try using different coloured threads and different shaped hooks. Another enhancement to this fly is the introduction of a rib. This is simply a second thread of a different colour that is tied along the shank to imitate the sections of a pupal body. Here's how it's done.

Using four equally spaced turns, wind the silver strip up the hook shank to finish just below the hook eye. Now let that hang down while you put three turns of the base thread on, trapping the silver strip in place. You’ll soon work out which side of the strip your thread needs to go to catch it in place. Snip off the excess silver strip at this point. Build up your head and wing case and finish off in the normal way. Another variant on this theme is to use lead wire for the silver strip. This gives added weight to the fly to help it sink when fishing deep.

Again finish off with a thin coat of superglue to lock everything in place - some people prefer to use varnish but I like using superglue to really lock everything tight. You would be surprised at how effective this ribbing can be in acting as a strike point for an otherwise cautious fish. Another idea is to use two pieces of silver strip on either side of the wing case as you build it up. They are simply trapped in place by the base thread as the head is made, on opposite sides of the body and parallel to the hook shank. And it doesn't need to be silver. Try gold or red or even the holographic plastic film that is found on some candy wrappers. Another idea to play with is to use gold or silver beads as part of the head of the fly. Again, these are readily available at the store. They give extra weight to the fly and I find it useful to use one as a point fly to help in keeping the flies separated in flight. Before starting your fly tying, wind three or four turns of thread onto the hook and whip finish that small tying. A tiny spot of glue will do and leave it to dry. When dry, slide a bead onto the hook and up onto this bed of thread. Glue it in place and leave to dry. 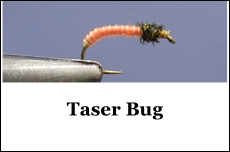 It is necessary to put this initial layer of thread as a foundation for the bead or it will move and chafe against the other threads. Now tie up your fly in the normal way. The final whip finish is performed below the bead, so that the bead sits snug against the eye of the hook. If your beads have one side with a pit, make sure that side faces away from the eye when putting it on the hook or the bead will sit over the eye and make it hard to tie onto the leader. Dave Cammiss makes a fly called the Taser Bug which shows the shape of the hook required and the method of making this type of fly.

The next video shows the thread that represents the entire process in my bloodworm buzzer being used as a base, finished off with a length of chenille tied in as a body. They call it the San Juan Worm. I would think this would need to be fished virtually static or else - under any degree of motion -   the chenille at the front of the fly would fold back over the body in an unnatural way. Well, that’s my opinion, but you try it and make up your own mind. 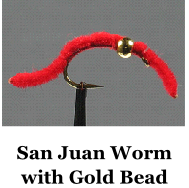 Finally, I thought my bloodworm buzzer was one the simplest flies you could make. Then I came across this video of another incarnation of the San Juan Worm, which is used by fly fisherpersons in America. They appear to take economy of effort to its ultimate degree. With this creation you don’t even need a base foundation of thread. Whether it qualifies for the title of a fly I will leave for you to decide!