With a name like "loch styling" there are no prizes for guessing where this form of drift fishing was invented. Many fishing competitions - and some venues - prohibit anchoring. The answer is to fish on the drift, whereby you sit sideways in the boat casting out from the side of the boat and hopefully you retrieve your fly line before the boat drifts over it! Fishing on the drift is fine in calm weather, but when the wind gets the boat moving too fast you cannot retrieve effectively before the fly line goes under the boat. We need something to slow the boat down as the wind pushes it across the water. 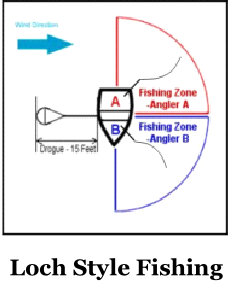 The answer is a drogue. Looking something like a parachute, this is a sheet of waterproof material with a cord tied at each corner. It is put in the water to the windward side of the boat, just where you would tie the anchor on the rowlock. As the boat is blown downwind, the drogue fills with water and acts as a brake, slowing everything down to a crawl. You can then fish comfortably while the boat proceeds at a stately pace across the water.

Just before the retrieve has finished the rod is lifted so the flies come to the surface and are held there for a moment or two. The top dropper (the fly nearest the rod) is made especially bushy - for example a muddler - to act as an attractor and is allowed to bounce on the water. This is known as dibbling. Any fish which has followed the flies is meant to take this as the moment when the flies are about to hatch and will seize them before they take to the air. 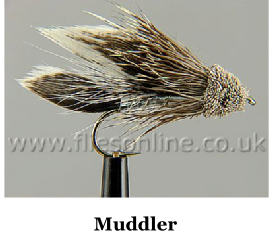 och style rods are especially long - around 11 or 12 feet to allow for this lifting and dibbling technique to be carried out some distance from the boat. Casts are short and frequent, so this technique can turn into hard work. The idea is to keep laying the flies in front of you rather than shooting them out great distances. A floating, slow sink or hi-d line can be used with a team of three flies. This is a great way to spend an afternoon with a buddy, but there is also the added work of hauling in the drogue and motoring back upwind when necessary. Make sure you avoid your intended drift line by a good distance when motoring back upwind or you will scare off the fish you intend to catch!

The theory of loch style fishing has been taken to its ultimate extent in some Scottish and Irish waters where the retrieve has been hastened to a point of extreme urgency. Here the plan is to give the cruising fish a mere glimpse of your fly and goad it into a chase and a grab at the bob fly which it will perceive as about to lift off into flight as you dibble it. This is all well and good, but this sounds like even more hard work to me - just when I thought I was meant to be enjoying myself!

Having voiced my grouse about the effort required there is some basis for believing that the loch styling method works as a good way of catching fish. I know - if it didn't work people wouldn't use the method but there is more to it than that. I have mentioned the idea of a fish perceiving that one fly is chasing the other and will happily join in the chase. This idea is borne out by the fact that a great percentage of fish caught in the loch styling method are taken on the top dropper. The fish have to pass by two perfectly good flies to get to the top dropper and this is exactly what they do. My theory is that the fish see the top dropper apparently being chased and decide that whatever is being chased must be particularly tasty. Equally, the action may awaken their competitive instinct and decide that this particular morsel belongs to them rather than the other creature that is chasing it.

Whatever the reason, the top dropper gets attacked far more frequently than the other flies. This top dropper is made especially bushy so that it is highly visible and creates a good wake as it moves through the top surface film. There are many flies that qualify for duty as the top dropper, but some are notably successful. The fly most readily identified in this position is the muddler, followed by a well hackled fly such as a soldier palmer or a nice bushy bumble. The fly must be big enough to hang and bounce on the water just before lift-off or the system won't work. One final thought to bear in mind: the size of flies are limited in many competitions - often to a total length of 1inch, so this tends to limit the effectiveness of the top dropper when being dibbled.

Loch style fishing concentrates on the upper parts of the water and is generally associated with competition fly fishing. But, often, the fish will be sitting deeper and a different technique is needed to find these fish. Originally, the method we now call Northampton Style was developed to fish the big, fast flowing rivers of the west coast of America, using fast sinking and lead core lines. These methods were then adapted for use in stillwaters., where the motion of the river is replaced by the movement of the boat through the water under wind power. Essentially, Northampton Style fishing is all about controlling the boat to give you the most effective fishing opportunities. There are several ways to get the job done - fishing with a drogue, a chain or a rudder. A chain is by far the least effective and most work intensive! Simply put, a chain - with or without a weight is lowered over the side of the boat and its drag slows the boat down. But it requires constant adjustment, paying out more chain to slow the boat - and hauling it back in when the wind drops off. It doesn’t sound like much fun and leaves little time for fishing after you recover from your exertions! 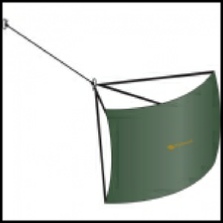 ter way to slow the boat down is with a drogue. While this sounds similar to Loch Style fishing - where a drogue is also used - the difference is in the fishing method and the different ways the drogue can be employed. First, as seen in the diagram below, the drogue can be attached to several points on the boat, Each attachment point will give a different rate of movement through the water and can be achieved by the use of a G clamp - you should protect the boat with a square of plywood at the attachment point. A drogue attached amidships, as in t

he first illustration, gives the fastest movement as there is the largest surface of the boat presented to the wind. Attaching from the stern slows the boat down and from the bow slows it further still. Some prefer to attach the drogue from the aft quarter as in the final illustration, as this gives a good casting angle.