Fly fishing has become a popular and accepted method of fishing for some species of sea fish in recent years. In particular, there are several hard fighting sea fish that come close to shore to feed and these present an ideal target for the ardent fly fisherman. But beware, some of these fish definitely don't want to get caught and will put up the fight of a lifetime before they give in!

There are some additional precautions to bear in mind when saltwater fly fishing. You must realise that your favourite fly rod and reel may not be designed for use in a saltwater environment. The furnishings of some rods and the mechanics of many fly reels are definitely not designed to withstand the corrosive effect of sea water. Always ensure that the equipment you are intending to use is rated for this harsh situation. You can't just take your favourite 7 weight fly rod to the seaside and expect it to cope with what is likely to come along. I watched my favourite rod break in half when I tried it! It was never designed to hold on to the thirty pounder that was on the other end. That's the expensive way to learn from your mistakes.

The flies that are used in saltwater fly fishing have to be of a different ilk. Normal hooks just are not up to the job when it comes to salt water. It's not what they were designed for. They will rust and weaken almost instantly. Use stainless steel hooks if you intend building your own flies for this purpose. Don't be afraid to make your flies as big as you like. And you can be inventive - there are many designs that you can copy for lurid orange shrimp patterns or similarly outlandish creations.

A good angler always cleans his equipment after use - although most of us don't. This is even more important when exposing your equipment to sea water. Everything should be rinsed in fresh water after use and extra attention should be paid to any reel that can be oiled or greased by the user. Lines will need to be washed as well. Salt water will dry the resins in a fly line if left unattended. This will cause the line to crack and degrade. Saltwater fly lines are the answer and should be put on your reel in anticipation of your expedition. Don't wait till you get there to start doing these jobs.

The common factor in all fish of interest to the marine fly fisher is that they move into the shallows to feed. This is normally at high tide, so the fishing is limited to a few hours each side of that time. Most successful locations are already well known by reputation, so a few questions in the area angling shop should set you on the right path. Look for areas with a shallow sandy coverage for most fish, preferably with an eel grass or similar flora. Other species will be found in the sluggish shallows in estuaries.

Here are a few of the more notable varieties of sea fish that will take a fly with some suggestions on how and where to catch them. More information from avid pursuers will be most welcome, especially those who would be interested in exchange holidays! 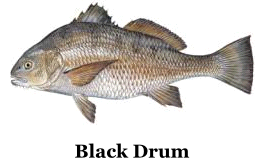 The black drum, Pogonias cromis, is found as far north as Nova Scotia, running south through the Caribbean to Mexico. It reappears along the coasts of Brazil and Argentina. It grows to well over 100 lb and has four or five large dark vertical bars on each side.

It sports a large set of barbels beneath its chin which it uses to grub for crustaceans and molluscs which comprise the majority of its diet. It is caught from the shore as well as from marine piers. Its name derives from the noise it can make by contracting the muscles controlling the walls of its swim bladder.

The bluefish, Pomatomus saltatrix, is a highly migratory species which is known to come close inshore, sometimes in huge schools. Indeed, they can be so voracious that they have even been known to attack bathers. They grow to over 50lb and are found in the temperate and tropical coastal waters of the Atlantic and Indian Oceans. They do not, however, extend as far north as the Mediterranean or Europe.

They feed on baitfish such as herring or menhaden which will send them into a feeding frenzy. When located they will take virtually any fly pulled at speed through the shoal. 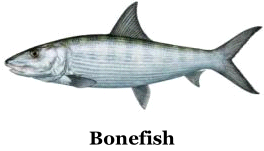 The bonefish, Albula vulpes, is found in many tropical coastal waters around the world, from Florida to Australia. They are bottom feeders that come close to shore to grub for crabs and other crustaceans. In very shallow water they can be seen with their dorsal fins out of the water as they search for food.

Typical weights are around 10 lb but they are known to grow to around twice that weight. They start life looking something like an elver with a small head and a transparent, elongated body. As they mature their body shortens and thickens as it takes on the adult form. They develop vertical bars along the length of their silver bodies but these fade with age.

Suitable fly equipment for this fish would be a 9 to 10 ft saltwater fly rod AFTM 8-10 with a sink tip line. Their preference for crustaceans would indicate a fly built to resemble a shrimp

in a bright orange colour. While sight fishing is the preferred method, the fish are skittish and will run for deep water if disturbed. Stealth, therefore, is the order of the day. When hooked expect a long run and a hard fight. The shallow water they are found in will suggest having a lot of line on your reel to accommodate their preference for distance! 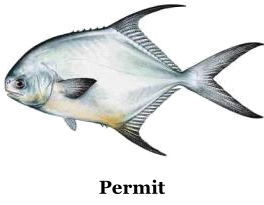 The permit, Trachinotus falcatus, is found in the warm tropical waters of the western Atlantic, particularly the coasts of the Bahamas and southern Florida. Its habits are similar to the bonefish, feeding in the shallows on crabs and crustaceans as well as shellfish and sea urchins. They are known to grow to over 50 lb, so a robust fly fishing set up is called for including a reel with substantial backing. They are considered one of the finest light-tackle game fish and their deep body construction ensures that they will fight exceptionally hard. Use similar fishing equipment to that required for bonefish. 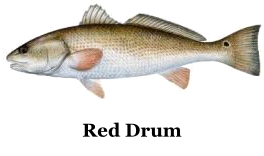 The red drum, Scianops ocellatus, has a reddish coloration with one or two large dark spots at the root of its tail. It is found from the coast of Massachusetts south through the Caribbean to the north coast of Mexico. It is a bottom feeder, preferring crustaceans and molluscs, but will also take small fish such as mullet and pinfish.

Known also as the channel bass or redfish, the adult normally grows to 40 lb, although specimens have been found approaching 100 lb. It was almost fished to the point of extinction but careful protection and management have seen their numbers recover. They can be caught by stalking in shallow sea grass beds as well as brackish estuaries and salt flats. 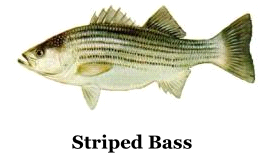 There are a number of sea bass which are of interest to the fly fisherman. The Striped Bass, Morone saxatilis, is the North American variety. The largest of the bass family, it is known to grow to over 120 lb. Indigenous to the Atlantic and Gulf coasts of North America, it has also been introduced to the Pacific coastal waters. 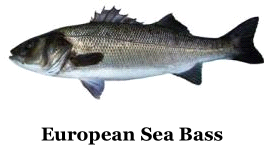 ike the salmon, it is anadromodous, moving into fresh water to spawn in late spring or early summer. There are some landlocked populations, living their entire lives in freshwater lakes. They readily take crustaceans, small fish and crabs.

The European Sea Bass, Dicentrarchus labrax, is the smaller old world cousin. It is found from Norway, round the European coast, through the Mediterranean and into the Black Sea. It achieves weights of nearly 20 lb and spawns in early summer. However, unlike its North American cousin, it lives its entire life in the sea. 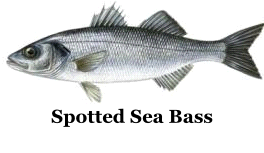 The Spotted Sea Bass, Dicentrarchus punctatus, inhabits a similar range to the European sea bass, although it is not found as far north. It can be identified from the European sea bass by its spotted flanks, although - just to confuse things - the young of the European variety displays similar spots in its juvenile form, which fade with maturity. Both species readily take sand eels and crustaceans, so imitations of these should produce results. 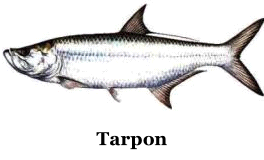 The tarpon, Megalops atlanticus, is without doubt the jumbo of the fly fishing world. It is found from the west coast of the Atlantic, sweeping south across the Caribbean to Central America and also on the northwest coast of Africa. It moves into shallower water with the tides and can be found in tidal creeks, estuaries and lagoons. It feeds on crustaceans and small fish and shellfish.

While a similar set up is required as for permit and bonefish, this species grows to over 300 lb in weight, although most rod caught specimens range in weight from 20 lb to 80 lb. A larger reel capable of holding a substantial amount of backing is called for. When hooked, it will leap and twist in a spectacular series of gymnastics in an attempt to escape. It often succeeds! This video takes tarpon fishing into a new dimension! 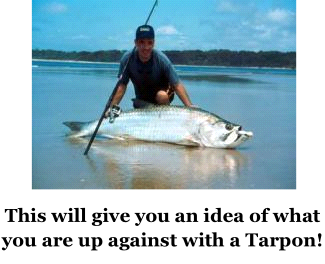